Discover the beautiful Coin and its surroundings

Finca La Toronja is located on a southern hill, 15-minute walk from the old town of Coín, with its quaint squares, tapas bars and restaurants. Coín is unknown to many of our guests, which is why we would like to take you through the area in this blog.

Coín is important for the region

Coín is a small town (24,000 inhabitants), located in the province of Málaga, 20 km from the coast. Strategically located between the white villages including Monda, Guaro, Alozaina (Sierra de las Nieves), and the Guadalhorce valley. Coín’s importance is reflected in the presence of secondary schools, a courthouse, the fire department and a hospital.

The main cultural elements of the city clearly show the influences of pre-Christian urban fabric after Moorish influences. These monuments are partially or fully protected by law.

In the old centre you will find:

Outside the centre you will also find several monuments, such as:

The natural environment around Coín is unique as it is close to the beaches of the Costa del Sol and the Sierra de las Nieves Nature In addition, Coín has its own natural gems, such as the Barranco Blanco Nature Reserve, the Pereila River or the pine forests of the Llanos del Nacimiento. These pine forests, with seven marked routes, are a mecca for MTB riders and hikers. In sum, in Coín there is something for everyone, whether you want to enjoy passively or actively. 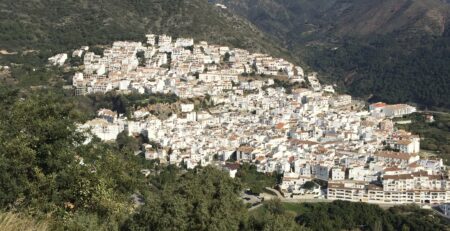 Within a radius of 10 to 45 km from Finca La Toronja are ten typical white villages, all with... read more