El Torcal is the first protected natural area in Andalusia (1929). Here we cross an area with strange rock formations. Many stimulate our imagination and show the power and workings of the geological processes.

El Torcal, one of Spain’s most impressive karst landscapes

But how did these different-layered, erratic shapes actually come about? The whole area consists almost of large limestone rocks from the jura (karst region). Due to their structure, the jura and limestones are subject to erosion. However, the limestone layers of the rocks are composed of various mineral limestones and therefore not all are equally resistant to frost and typical weathering of karst. Witnesses to this are the limestone plates (signs), which seem stacked on top of each other.

The rock formations at El Torcal take on the strangest forms, such as animals and ghost figures, as a result of this process. El Torcal is a huge, nearly 1,200-hectare rock labyrinth, which stands out like a large, round table in the area. The highest point is at 1,336 metres altitude. El Torcal can be seen from afar, even from our garden in Finca La Toronja.

Due to the capriciously shaped rocks and well-passable paths, the nature reserve is very suitable for children. They often find the adventurous walk between the rocks magical. Our son Tim was fully admired by this special landscape. We still come here often with him and he still continues to marvelise.

As for the fauna here: in addition to ibex, wild boar, badgers, wild cats and foxes can also be seen. In 1989, the nature reserve was granted nature reserve status, due to its wealth of flora and fauna. A bird protection area was also set up at the time, due to the impressive number of different bird species, such as the griffon vulture, falcon and the king eagle.

Hiking routes through the nature reserve

Different routes have been plotted from the information centre depending on the duration. There used to be fixed routes, but recently the routes have been adapted, taking into account the weather conditions. The trails are easily passable and the routes are never longer than 5 km. This also makes a walk easy to do with children.

El Torcal is served by two different routes from Finca La Toronja. Firstly, you have the quick route (A-357 & AP46) via the motorways to Málaga and then towards Antequerra. Secondly, you take the route via Alora and Valle de Abdalaijs, which is certainly worth it because you drive through various landscapes and this route also offers you a beautiful view of the Andalusian interior. 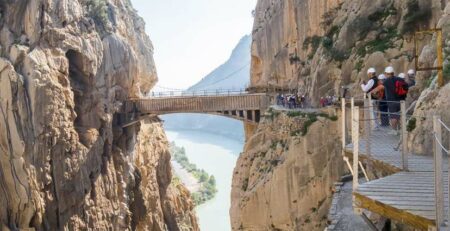 Hiking at the embalses Guadalhorce and El Caminito del Rey

Hiking in the beautiful nature reserve of the embalses del Guadalhorce and El Caminito del Rey. One can reach this... read more